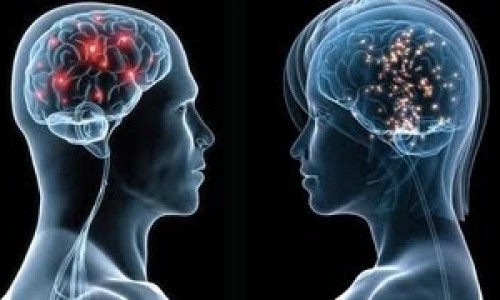 The Gender war has been eternal. I am not sure whether we can call this a war, sometimes yes, but the tussle between the genders is more like it. I get to see it everyday in my interactions with my son and daughter. They are two different individuals, with different thought processes, but there is something inherent in them by the virtue of their gender. I have not been able to  put my finger on what exactly it is. But it looks like my daughter ends up processing thoughts and dreams inside of her more than my son does. My son seems to be more present to what exists in the moment, whereas my daughter seems to wonder about what could be. Now this could be a simple personality difference between them, as well, but somehow after observing the two genders at home and outside. I have realized that both serve certain functions. Also gender is just the outside, there are many men who are more feminine and gentle than many women, who seem to possess more masculine traits.

I remember a scene from book “A most Dangerous Method” where Sabina Spielrein tells her mentor Carl Jung, there is a woman in every man and a man in every woman. The statement made by her, made me realize that the gender differences exist only as a projection, of what we don’t accept in ourselves. So a Man in a Woman’s world would be someone who is tough, good in numbers, will take responsibility, can earn for the family, can take decisions, will have great financial acumen, good at Maps etc… and other things, that a woman may not be good at, or doesn’t wish to do. On the other side a Man would expect a woman to be gentle, soft spoken, great cook, good teacher, good mother…etc.. stuff that a man would not like to get into. Here the projection may differ from Society to society, family to family and person to person, so not one image would fit all. However through years of conditioning, there are some judgements that we have about both the genders. If a man seems too soft, he must be Gay…if a woman seems different she must be a Lesbian. Then we may suffer from moral judgements around Gay and Lesbian communities. So much of luggage and so many judgements around how a man should be? and how a woman should be? Who creates these wars, of course we do. First we have a war within ourselves our own masculine and feminine, who need awareness, understanding and acceptance and then we project it to the outside world.

When I see extremes it pains my heart. There is female foeticide at one end and feminist rebellion at another end. Both men and women suffer from this extremism. In another blog of mine I had explored role patriarchy in my relationship with my in-laws. Patriarchy has been one of the main causes of the mis-understandings between the Genders. It has always divided one against the other through societal conditioning and hence never allowed complete acceptance. It has not allowed the men to accept the woman in them and the woman to become comfortable with the man in them. The journey to acceptance can be long and arduous but that it what will bring healing in the Man- Woman relationship inside each of us and outside of us. That is when the Shiva and Shakti integrate in us and show us a clear path and clear goal.

Families today are still not looking at integrating and accepting masculine and feminine in themselves and are disintegrating. It is important that this integration becomes a important part of, how we live our lives.
Corporates today can continue to focus on business and not the feminine- masculine integration, but it will all have to change in coming future. For that integration alone will get better team functioning, innovation and new creativity.

My life journey began in a small village in Kanpur, U.P. I was raised by my grandparents for the first four years of my life. During the day I found myself running amidst the farms and the open sky, squinting at the sun. At nights I would sleep under the stars counting them and making weird patterns. The moon was my sleep partner then. My writing journey began at the age of thirteen, in Mumbai, when I bunked a class and found myself hiding from my maths teacher, amongst children, who were writing poetry for a competition. I wrote too, and to my surprise after a week, I was announced as the winner. Couple of months later I found myself battling lung tuberculosis, I was in complete isolation, but poetry gave me company. I wrote some really dark poetry around life and death and how beautiful death was. My writing and my imagination since then has been my greatest friend and confidant. After my Post graduation in Microbiology, I was hired as a Scientist by a Multinational organisation. However, my soul kept humming a different song, although I was considered to have high potential and was known to be highly competent. After my marriage and two children, and nine years of corporate career, I jumped into humanities. I started conducting leadership workshops and interventions for organizations and I still do. My work helps me connect with the various aspects of human behavior and thus takes me closer to experiencing more of who I am. As a life coach to several people, I observe their brightness and beauty, in their language and actions, and help them to see what I see. This helps them unleash their own spontaneity and experience more of who they really are. My work is my passion and it helps me grow. It makes my writing become more mature and rooted. Both writing and painting are meditative processes for me and help me explore new worlds, while creating deeper presence for myself. I love to indulge in life, and I cheer for the same. I get excited and enthused about new ideas and great stories. I cry watching emotional scenes in movies and can easily get hooked on to some romantic drama. I love gardening and can be seen communicating with my plants in the mornings over green tea. Rest you will find in my posts here. View all posts by Rashmi Dixit